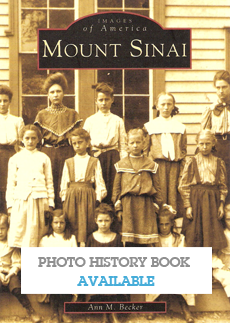 The community of Mount Sinai, known as “Old Man’s” during colonial times, was officially established in 1664 when Native Americans sold the land to the Town of Brookhaven for “goods” including coats, stockings, shirts, kettles, knives, and hatchets.  The original name for the Mount Sinai community is explained in three different ways.  Local legend has it that a colonial swindler named John Scott finessed one Major Gotherson, a wealthy aged Briton, out of $10,000 pounds with a fraudulent land deal.  Another suggests that the name originated from the sale of land by Native American Sachem Massatewse, chief of the Setauket tribe, to Brookhaven Town in 1664.  Still, a third story attributes the name to a 17th-century tavern owner in the area.  In any case, the name was changed to Mount Sinai in 1840, when the local postmaster or his wife purportedly randomly pointed a knitting needle at his open Bible and chose the name closest to the point of the needle.

Mount Sinai was home to a large Native American population over 5500 years ago.  At this time, it the area was known as “Nonowatuc” or “the stream that dries up.” Long Island’s north coast offered sheltered harbors and coves with easily available food supplies, resources needed to manufacture stone tools, and convenient transportation for canoes.  While relying on hunting, gathering, and fishing, early Native American populations also established long-term settlements on Mount Sinai Harbor.  The Indian village was located on the south shore of the harbor, and archeologists believe it was one of the most densely populated areas in the Long Island Sound region.  Local residents can still find artifacts left behind by the hamlet’s first residents.

During the American Revolution, a patriot raiding party landed at Cedar Beach and made its way across Long Island to the Manor of St. George in Shirley where they burned British supplies. The Tallmadge Historical Trail, which begins at Cedar Beach in Mount Sinai, commemorates this daring feat.  Mount Sinai residents served in the American army during the Revolution, and endured the British occupation of Long Island or relocated for the duration of the war.
Numerous well-preserved historical homes and buildings line the Historic District along North Country Road in Mount Sinai.  These include the Davis house, the Tillotson house, and the Congregational Church.  Other historic homes include the Ketchum house, the Selah Homan house, and the Theodore Velsor Davis house.

Early settlers engaged in shipbuilding, farming, and fishing, and cut and sold cordwood.  Cash crops included wheat, rye, buckwheat, and corn.  Sheep were raised for wool and meat, and most farms had dairy cows and pigs.  Blacksmiths, shoemakers, schoolteachers, salesmen, shopkeepers, and storekeepers all lived and worked in Mount Sinai. Windmills and gristmills were built in the area. The harbor provided a variety of shell and finfish, and many residents pursued careers at or on the sea during the 19th century.  Active community residents maintained the school district, established churches, and a civic association, ran the post office, and set up a fire department.

Mount Sinai has been a pleasant place for vacationers to enjoy the natural beauty of the picturesque hamlet since the 1800s.  Wealthy city dwellers spent summers here, and Crystal Brook Park was established in the 19th century as a health resort and private residential community.  Satterly’s Landing and Davis Island provided recreational facilities for summer visitors.  The Long Island Rail Road’s Port Jefferson Line ran through Mount Sinai from 1895 until 1939, bringing families to summer cottages on the beach and children to the various camping facilities in the area.  Vacationers could stay in private homes, or small hotels in the area.  Mark Swan, Lionel Barrymore, Dawn Powell, Norman Rosten, and Arthur Miller all rented homes in Mount Sinai.  Marilyn Monroe visited Cedar Beach and the nearby Chandler Estate during the 1950s.

Long famous for the locally grown peaches sold at the Davis Peach farm stand on Route 25A, vestiges of Mount Sinai’s farming heritage still remain although modern suburban development has eliminated much farm acreage.  Early residential developments like the “Artists and Writers Colony” advertised life in Mount Sinai as “the most beautiful spot on the wonderful North Shore.”  More modern suburban development beginning in the 1960s changed the community significantly, but farming and maritime activities continue in Mount Sinai, as they have for generations.

Today, the Harbor and Cedar Beach are used year-round for recreational and commercial activities including swimming, boating, hunting, clamming, lobstering and fishing. Mount Sinai harbor, formed by glacial activity, is 455 miles in area.  Predominantly salt marsh, mudflats, and open waters, the southern part of Cedar Beach has been heavily developed as a marina and boat mooring area. State environmental laws are now in place to protect the wetland areas in Mount Sinai after controversial sand dredging changed the harbor ecology forever.  A Nature Study Center maintained by the Town of Brookhaven preserves a small portion of the original sand dune and provides educational opportunities for residents and visitors alike. Recent preservation efforts have ensured that residents will continue to have open space protected and available for passive and active recreation, and will sustain a sense of the heritage and history of this beautiful hamlet.

We sincerely thank the residents, community and political organizations and local businesses who purchased ads in our 100th Anniversary Commemorative Journal and encourage our members to support them whenever possible.

A Cake in Time